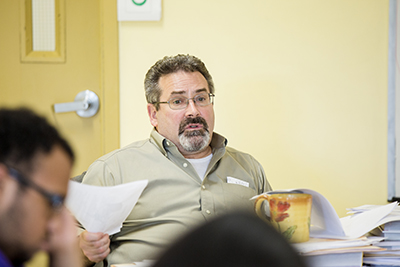 In Dr. David Montgomery’s classroom, history is about making meaningful connections. Dr. Montgomery serves as Department Chair for the Upper school department of History and Social Sciences, and teaches a variety of history courses for the ninth through twelfth grades. In his view, the art of history is not to be found in an accumulation of facts, but in the ability to bring knowledge together in a way that generates meaningful narratives that explain our world’s past and present. “Teaching history shouldn’t devolve into a collection of dates and facts that seemingly have no relation to each other,” he says. “That style of teaching doesn’t invite any involvement or engagement from students, nor does it invite students into the conversation.” For Dr. Montgomery, one of the keys to good history instruction—particularly at the high school level—is making connections. “People take pleasure when they begin to understand events better,” he says. “We all like stories, right? So, when students begin to understand that there is a story there—that there are reasons why things are the way they are—they begin to connect with the story. They find meaning in the events, and their ability to create meaningful explanations of the past or present grants them not only a sense of academic proficiency, but also of the pleasure of learning and knowing.”

Dr. Montgomery began his path towards teaching and eventually to Quarry Lane when he moved to the Bay Area to attend college at Stanford University. There, he pursued his undergraduate degree in English Literature and Russian Literature. While at Stanford, he participated in the Structured Liberal Education program—a program unique in its intellectual rigor and multi-disciplinary approach. He credits the program with shaping his interdisciplinary approach as well as inspiring a belief and enthusiasm for humanities. He went on to pursue his doctorate degree at U.C. Berkeley in Slavic Languages and Literature, focusing on Russian literature. As part of his graduate studies, he taught both Russian language and world history at Berkeley. Looking back, the experience helped him tremendously and inspired his love for teaching. “As far as I remember,” he recalls, “world history, as a subject, scarcely existed when I was in high school. Teaching it as a graduate student was an extremely exciting and a rewarding experience.”

History isn’t about isolated facts. Good history instruction, matched by good effort by the students, invites imagination and empathy. We are broadening our worldview through studying history."

After leaving the world of academia for a time – he’s also a survivor of the “Dot Com Bust” early in this century – Dr. Montgomery decided that education was indeed where his heart lay. He taught at the Pacific Boychoir Academy for 2 years before joining Quarry Lane. Upon joining Quarry Lane, he found the enthusiasm and commitment of his students a good match to his style of teaching. “It’s very rewarding to see students who are excited about learning, and I see a lot of that here,” he says. “It’s also deeply rewarding to see their intellectual growth. I take seriously the notion that I’m training students to be critical thinker and to be global citizens, which is in many ways the back bone of the Quarry Lane education. For me, it’s been a wonderful experience.”

At Quarry Lane, Dr. Montgomery has taught nearly every level of high school history as well as a variety of other disciplines. His love for history, again, has something to do with his connection to it. Growing up amidst the Cold War spurred his interest in history and politics, including American politics as well as relations with the Soviet Union and Russia. A portion of his graduate work fell when communism was collapsing in Eastern Europe, including months spent in Russia during some of the dramatic events that occurred leading up to the collapse of the Soviet Union. “In that regard,” he says, “I’m grateful that I can say I didn’t only study literature or history, but I observed first-hand as some of it was made.”

As for a favorite period of history, Dr. Montgomery says there are too many fascinating ones to make a single choice. However, if he could travel back to a certain place and time, classical Athens—during the period of Pericles and early Athenian democracy—or, to Renaissance Florence in the 1400’s would be among the first of the periods he would choose. And, if he could share a meal with a historical figure, he would love to dine with either Theodore or Franklin Roosevelt.

While his classes may have a reputation for being among the more challenging courses at QLS, Dr. Montgomery is certainly among the school’s most respected instructors, and his students continue to develop and demonstrate their enthusiasm for critical thinking, cultural breadth, and the study of history. As he begins his ninth year of teaching here and reflects upon his teaching philosophy he says: “History isn’t about isolated facts. Good history instruction, matched by good effort by the students, invites imagination and empathy. We are broadening our worldview through studying history. I believe there is a tremendous amount of enjoyment that can be found in understanding different parts of the world, encountering great minds from the past and present, understanding different systems, major discoveries, crises, changes, and of course, discovering connections from our pasts to our lives today.”